This page displays a small selection of work that Hughes made whilst living on the Island of Gapado, South Korea. The works here are anticipatory and indicate the direction of travel - they are incomplete projects. For more information about Gapado AiR please see the link below.
http://gapadoair.kr/en/about.php These two recent works were created whilst living on Gapado Island (South Korea). Hughes's artworks often draw particular attention to the depiction and presentation of plastic pollution and nascent ecological anxieties. Fascinated by the work of British artist Paul Nash and his concepts surrounding quasi-scientific taxonomies in respect of objects.

These works combine elements of resemblance to both natural and unnatural materials set upon an imaginary seascape. Both forms rest upon a sea surface reminiscent of J. G. Ballard's oxygen-permeable membrane of plastic waste in the novel The Drought. Both images are created by using volcanic and plastic rock (plastiglomerate). The Korean movie Parasite [directed by Bong Joon-Ho] features a suseok or what is commonly known as a scholar’s rock. In the film, the character Ki-woo is presented with a scholar's and he coos: “It’s so metaphorical.” 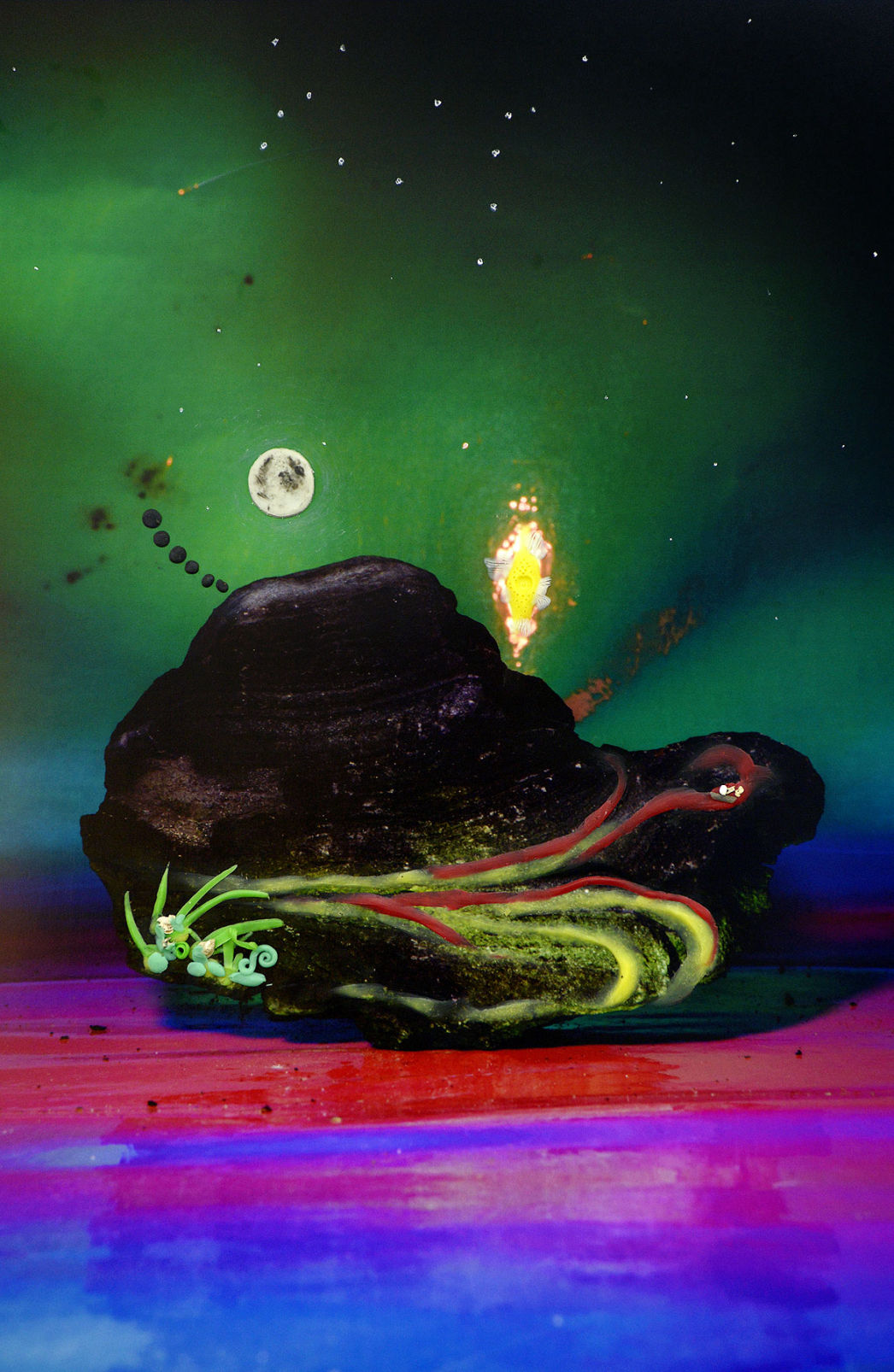 Both images are interconnected in terms of their material construction and subject matter. Both were created with materials collected from the Jeju Island volcanic system. These lie on the continental shelf off the south coast of the Korean Peninsula and consists of a large (c. 70 km × 30 km), elliptical (elongate in an ENE–WSW direction) and symmetrical composite shield volcano (Mount Halla).

There are many sites of ritual activity on Gapado Island. Praying for safety and a good harvest is a unique cultural activity of the island's Haenyeo community. The Haenyeo exorcism asks the dragon god of the sea for welfare and a good harvest. Hughes discovered many kinds of objects including trash placed at these sites. The image above is overlaid with a 3-D image created from collected materials from the Coastscape workshop which took place at his exhibition at Gapado Village Hall.

'On this and other dives, I carefully studied the changing colours, both by direct observation and by means of the spectroscope. Just beneath the surface, the red diminished to one-half its normal width. At 20 feet there was only a thread of red and at 50 the orange was dominant. This in turn vanished at 150 feet. 300 feet found the whole spectrum dimmed, the yellow almost gone and the blue appreciably narrowed. At 350 I should give as a rough summary of the spectrum fifty per cent blue violet, twenty-five per cent green, and an equal amount of colourless pale light. At 450 feet no blue remained only violet, and green too faint for naming'.

Hughes makes use of controlled lighting to simulate a kind of bioluminescence as seen in nature. Across popular media, in marine life books, web pages, photographs, and videos, colourful aesthetics become synonymous with a type of environmentalism combined with aesthetic pleasure, responsibility, and concern. Here in these developing new works, Hughes directs the viewer to imagine a world where the sea has evaporated, leaving behind abandoned and lonely remnants of the 20th and 21st centuries. Hughes's use of commonplace materials "plastic beer bottles, stones, beach debris" explores the notion that they are in a state of  becoming "alien" when transformed through the artist's eye, extending the sense of an uncanny way of being in the world."

The deposited polystyrene ball has a hand-decorated line that echos the thermohaline circulation conveyor belt, which drives the earth's deep, underwater currents. The object rests upon melted plastic which was collected during one of Hughes's many walks around the island.

These tiny photographs (5x7cms) are embedded with surf wax and collected tiny fragments from the coast which look like alien microcellular forms. The moulded surf wax looks similar to crustaceans or tentacles, the forms on the print surface paralleling processes created by marine animals. Hughes’s interest in the mechanics of using simple practical materials to embellish the images might seem to be following recent trends in contemporary photographic practice. However, Hughes is not motivated by a nostalgic longing for the analogue. For him, photography has always had the potential to transcend its two-dimensionality and acquire objecthood.

Following on from his Red Weed series made during the pandemic in Cornwall, Hughes observed new seaweed species on the island. By re-calibrating, the colour of these entangled algal forms from red/rusty brown to yellow, Hughes references the Yellow Sea. Gapado sits between the Yellow Sea and the East China Sea in the North Pacific Ocean. The Yellow Sea derives its name from the colour of the silt-laden water discharged from the major Chinese rivers emptying into it. The sea annually receives an immense quantity of sediments, mostly from the Huang He (via the Bo Hai) and the Yangtze River, both of which have formed large deltas.

During a survey of sub-tidal zones at five sites on and around Jeju Island, Korea, from February 2013 to November 2015, a total of 186 macroalgal species were identified, including 18 green, 33 brown, and 135 red algae. The number of species was highest at Gapado Island (125 species) followed by Bukchon (123 species), Sagye (122 species), Sinheung (122 species) and Sinchang (97 species). Title: Below Imaginary South Korea
Media: Inkjet Print
Hughes's work speaks to the shifting movement of waste matter, and complex entanglements of discarded material. As the stuff settles and begins the long process of amalgamation, disruption and a kind of fossilisation they draw attention to historic times and future times. This stuff also points to our own transience, and the fragility of our ecological niche is made more poignant by the state of knowledge we now have about where our destructive behaviour may be leading. Close Up Detail
Recent advances to analyze the 3D volumetric space between the surface and the bottom of the sea now exist on a global scale. Previously in the 1950s, Marie Tharp’s maps demonstrated that the ocean floor was a vast world more complex than first thought. Combined with other photographic and film techniques the capacity to study oceanic environments seems endless. The fragility of various oceanic habitats is made more poignant as our increased state of knowledge about our destructive behaviour becomes clearer. Solargraphs are the observation of the sun and its path in the sky created by the combination of pinhole photography and digital processing. Unseen by the naked eye, the image traces the trajectory of the sun in the sky due to the rotation of the Earth on its axis. In this image, Hughes references the Paul Nash painting Totes Meer where the moon has risen above a sea of wrecked German aeroplanes. Hughes utilises the solargraph process in the creation of a set of works created at one of his favourite rock pools. These images refer to circular motifs commonly found in the work of many British artists during the surrealist period, for example, in Nicholson's abstract paintings and Moore's and Hepworth's sculptures. 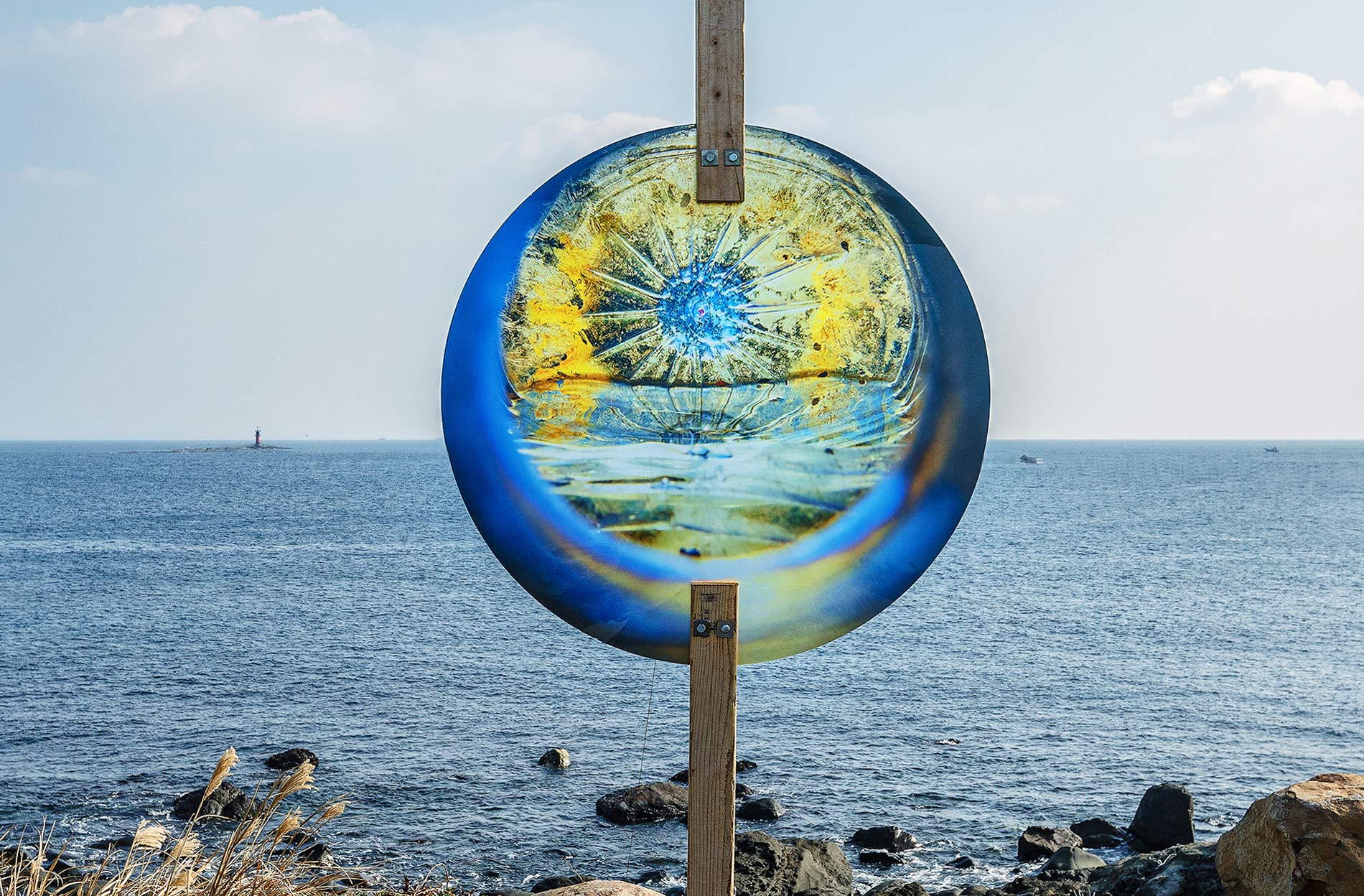 Lined up along the kerb was a selection of kitchen appliances—a spin-dryer, two refrigerators, a trio of washing machines and a microwave oven. None was new, and rust leaked from their hoses. They were the familiar furniture of every kitchen in Brooklands, but there was something surrealist about their presence that unsettled the small crowd.

For more than thirty years Hughes has been photographing wasted forms on the beach and in the city. He has searched for expelled, collected and re-distributed disconnected materials linking them to notions of the sublime, transforming them into a state of becoming 'things' with 'thing-power'.  In effect, he reappropriates the material into a human-oriented language, which then becomes useful as an object for human consumption, as an artwork, or as another functional object.

"A garbage can, occasionally, to me at least, can be beautiful. That’s because you’re seeing. Some people are able to see that—see it and feel it. I lean toward the enchantment, the visual power, of the aesthetically rejected subject."